Today the world lost a great chef to COVID-19. Floyd Cardoz was an inspiration for anyone with a love of Indian and classical cuisines; he was regarded as the master of their fusion.  His cookbook, Flavorwalla, is one I actually read from cover to cover rather than just dipping in to check out recipes. Two weeks ago he was filming an episode of a Netflix show and opening a new restaurant in Bombay. Now he’s gone.

Mr. Cardoz flew to New York from Frankfurt on March 8th en route from his native India.  Traveling during these crazy times, let alone traversing the 4th busiest airport in Europe, is incomprehensible to me.  I don’t know why anyone would want to budge from the sofa right now.

Some people don’t have a choice. I’m reading posts in social media groups from fellow Brits who have to leave the US or risk their visas expiring if they stay put for their own and other people’s safety. They have a bigger fear of dealing with the US Customs and Border Protection in the long term than risking their lives by traveling now.   I know Canadians who have had to cut short their winter sojourns in Florida and rush home.

Here are some tips for anyone who absolutely has to travel. Four years ago, I wrote a book about staying healthy while traveling.  Here is an excerpt from Mile High and Healthy: The Frequent Traveler’s Roadmap to Eating, Energy, Exercise and a Balanced Life. Some of it may seem obvious but that doesn’t mean that we all do the obvious when it comes to health (drink more water, eat more greens, exercise every day). Consider these tips to be gentle reminders.

(Note: I should add that tray tables and arm rests are the most germ ridden spots on airplanes. Be sure to clean them with antibacterial wipes as soon as you take your seat).

Travelers often complain about picking up colds or the flu after flying. I’ve certainly blamed the odd cold on fellow passengers. Confined spaces, reused blankets and pillows plus proximity to other people over the course of several hours mean exposure from breathing, coughing and sneezing as germs are released into the air.

A 2004 study in the Journal of Environmental Health Research revealed that 20% of passengers reported colds five to seven days after a two-and-a-half-hour flight.

According to Mariana Calleja, M.D., founder of travelthy.com, “Touch is the most common way to get infected during air travel. For example, everyone without exception has some kind of contact with other people’s germs whenever they go to the toilet and grab the door handle, or when they touch seat heads as they walk through the aisle during flight, or when they are talking to a hotel’s front desk staff, exchanging documents and waiting with arms on the counter during the check-in process.”  Dr. Calleja says the simplest way to avoid infection is to wash one’s hands as often as possible.

By the way, it’s wise to monitor yourself for a few days after a trip because symptoms may not appear immediately.  Continue to hydrate and look for signs, such as digestive trouble, unexplained fevers or headaches, and skin reactions.

Proximity to others is the primary factor that causes germs to spread. There is a misconception at large that the recirculating air in the cabin is to blame.  A 2002 study by the Aerospace Medical Association concluded that there was “no evidence that organisms pass from one person to another through the aircraft ventilation system.”  Note that in newer aircraft 50% of the air in the cabin is recirculated and passes through filters that remove bacteria, fungi and most viruses.  The other 50% of the air comes from outside. These findings were corroborated by further studies in 2010.

So why do people get sick so often after concluding a hectic travel schedule? You got it—travel can imperil the immune system. As we’ve seen, you’re dealing with dry cabin air, potential fatigue and very close and continuous contact with a bunch of other human beings.  Your ability to resist infection, thanks to the strength of your immune system, will strongly influence whether or not you catch an infection on a plane.

A 1997 study in the European Respiratory Journal suggests that low humidity impairs your ability to resist germs because the mechanism that protects against colds slows down or stops when there is low humidity.  This would be your Mucociliary Clearance System which traps viruses and bacteria before moving them from the nose and throat to destruction in the stomach.  When dry, the mucus becomes too thick to be moved by the cilia (little hairs) that normally push it along.  The infectious bodies hang around and you get sick. This is another most excellent reason to stay hydrated. 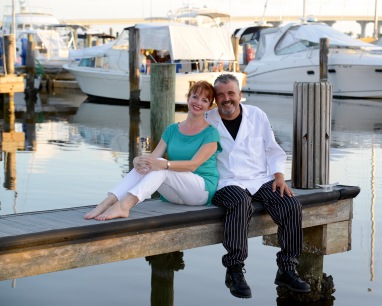 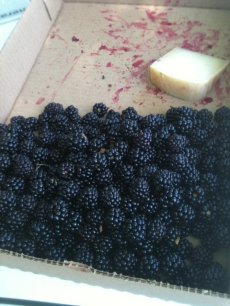 Freshly picked and a piece of local sheep’s milk cheese 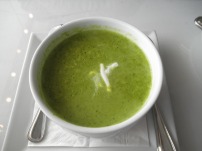 All set for dinner

Octopus salad with a poached egg

Okra growing at our local farm 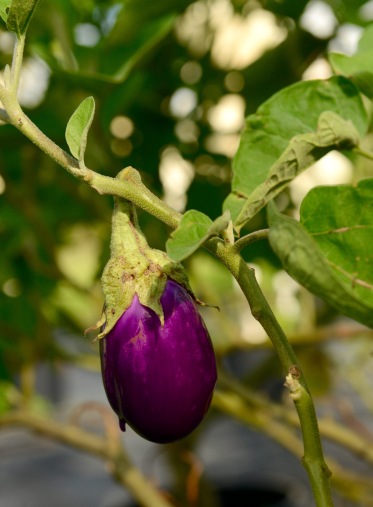 Baby eggplant at the farm

Delicious, Healthy Food for People Who Don't Have Time to Shop, Chop and Cook